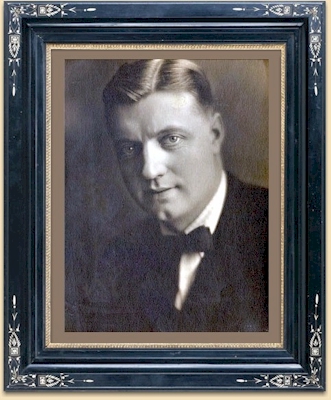 
The following is the composite of biographies published in 1917, 1937, his obituary, and independent research.

Elmer Hemrich was born 18 Sept. 1890 in Alma, WI, a son of Alvin Hemrich (see biography) and Wilhelmina "Minnie" Rutschow. Minnie was born in Ganchendorf, Germany, and his father, Alvin, in Alma, WI.  Elmer's father was engaged in the brewing industry his entire life, beginning when he assisted his brother, William, manage the family brewery in Alma. Alvin then brought his wife and young son Elmer to the West coast to join his father, John, and another brother, Andrew, who had a brewing enterprise in Seattle (the Bay View Brewery).  Alvin then took a position at the Victoria Brewing & Ice Co. in Canada, where Elmer's brother, Andrew, was born in Sept. 1892. Alvin returned to Seattle and the family remained their, making it their home. In 1905 Elmer's youngest brother, Walter, was born in Seattle.

Elmer passed his early days in Seattle attending public schools, as well as Wilson's Modern Business College. His father had purchased the Aberdeen Brewing Co. in 1902, and Elmer spent all his time away from school assisting with the numerous duties entailed in brewing process. By 1910, he had become proficient enough to take over the post of assistant manager of the Aberdeen plant.  In the following year, just prior to his twenty-first birthday, he was placed in full charge of the brewery. With Elmer now manager and vice-president of the brewery, Elmer's father, Alvin, was free to devote all his attention to his other responsibilities as president of three Seattle breweries:  Hemrich Bros. Brewing Co., the Claussen Brewing Assn., and the Independent Brewing Co.

Surf Packing Company - In February 1915, the Surf Packing Co. was organized in Aberdeen, with Alvin Hemrich as president; Elmer E. Hemrich, vice president and manager; and Paul F. Glaser secretary and treasurer. The cannery produced the Hemrich brand of clams and clam nectar. They erected a building ninety by one hundred and thirty feet, installed all modern machinery and electric motive power and they have a steam plant for cooking. They employ thirty-five people and had the capacity for thirty thousand cases each season. Elmer E. Hemrich also became one of the organizers, and was a vice president, of the Security Savings & Loan Association in Aberdeen.

In 1919 the family expanded their razor-clam packing business when Elmer built a second cannery at Chisik Island's Snug Harbor, on the unpopulated west side of the Alaska's Cook Inlet. This cannery, in addition to packing clams also prepared salmon, but was lost by the Hemrich family during the panic of 1922.

However, in spite of these set backs the family decided to give it another try. In 1923 Elmer found another site, 150 miles south, and  proceeded to build a new cannery at Kukak Bay in Southwest Alaska. This became one of the most successful fish preserving establishments in the North.

In 1925 Elmer, leased the Alaska cannery to another packing company, and concentrated on helping his father reopen an old, frame, brewhouse adjacent to the Bay View plant, in order to brew near-beer. Also in 1925, Elmer took on additional responsibilities. On May 23rd, at San Rafael, California, he married Nina Irene Beckwith, daughter of Elmer Gridley and Lucina Beckwith. Ten years later the couple adopted twin daughters, Zonya Mina, and Zarya Lou, born June 13, 1935.

In 1929 Elmer was involved with his father in the start-up of Hemrichs Inc., which later became the Hemrich Brewing Co. He stayed on brewing near-beer with his father until new opportunities in the brewing industry became available. In July of 1932, recognizing the possibility of Repeal, seven and one-half months before it actually occurred, Elmer and some Seattle interests, purchased the Columbia Brewing Co. of Tacoma. Since the brewery had been producing near-beer during Prohibition, it didn't require as extensive remodeling as might otherwise been necessary. In April 1933, sales of his Alt Heidelberg Beer commenced under U-Permit No. 1204. He remained the president of Columbia Breweries, Inc. until October of 1935, when he sold his interest to Joseph F. Lancer. 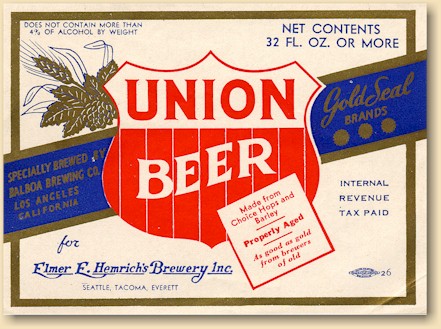 With no intention to quit the brewery business, he founded Elmer E. Hemrich's Brewery, Inc. immediately after retiring from the Tacoma concern. The company was incorporated on Nov. 1, 1935, by Elmer and his wife, Nina. They had planned to equip and operate a brewery on the premises of the former Independent Brewing Co. at 9th Ave & Adams St., however that venture never materialized.

Instead of opening a brewery, Elmer, Nina, along with Elmer's brother, Andrew, established an agent/distributorship in Seattle and Everett, with company headquarters located at 2601 So. Holgate St, Tacoma. While not manufacturing the product, their new company functioned as a "contract" brewer. They distributed various beers under their Gold Seal Brands banner which had been brewed and bottled by different breweries under contract.

One example was their "Union Beer" made by the Balboa Brewing Co. of Los Angeles (right). An identical label from the Mutual Brewing Co. shows that they were also producing Union Beer in Ellensburg, WA, but this was after Elmer's companies were sold in 1940. 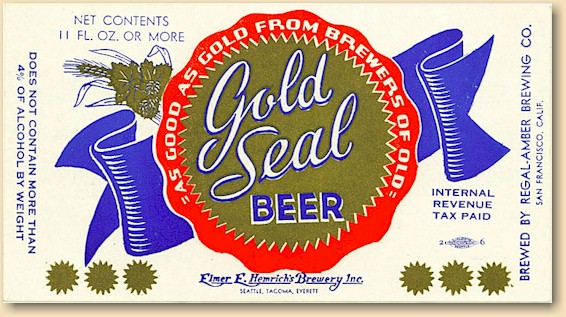 Another brand of Elmer's, made in California, was his Gold Seal Beer. This beer was "As Good as Gold from Breweries of Old" and was brewed by the Regal Amber Brewing Company of San Francisco. However, he also contracted with Mutual of Ellensburg to brew and bottle his Gold Seal brand.

It's not surprising that he also had his Gold Seal Beer produced in his father's Apex Brewery.

After his father's death in February of 1935, the plant continued under the supervision of his younger brother, Walter.

In the Fall of 1936 Elmer changed the name of his contract brewing company to Gold Seal Breweries, Inc. and moved the operation to Tacoma.  It was located at 6200 So. Tacoma Way, and was the previous home of the Western Rubber Company, built in 1919. 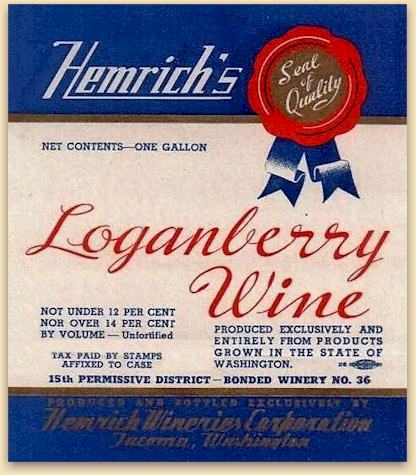 Elmer was also the founder and president of the Hemrich Wineries Corporation, which was devoted to the manufacture of wines and brandies from Washington fruit and berries.

However these ventures were short lived. On 20 January 1937, 46 year old Elmer E. Hemrich collapsed at his Lake Steilacoom home, and died in a Tacoma hospital from heart failure. He left a widow and infant twin girls.

Following Elmer's death, his brother Walter left the Apex Brewery to assist his sister-in-law in running the Winery and contract brewing operations in Tacoma, and Andrew continued managing the Seattle office. Nina, Walter, and Andrew were only able to keep the Gold Seal Breweries business going until 1940. The Hemrich Wineries Corp. closed shortly thereafter.

Sadly there is little to be found about Elmer Hemrich's ventures, or this visionary man. Had he lived, he would certainly have accomplished so much more.

For any comments, additions, or corrections -
or if you have items for sale - please contact me:

All contents, including images, are copyright by BreweryGems.com
and can not be used with out permission of BreweryGems.
Copyright © 2005 ~ All Rights Reserved.