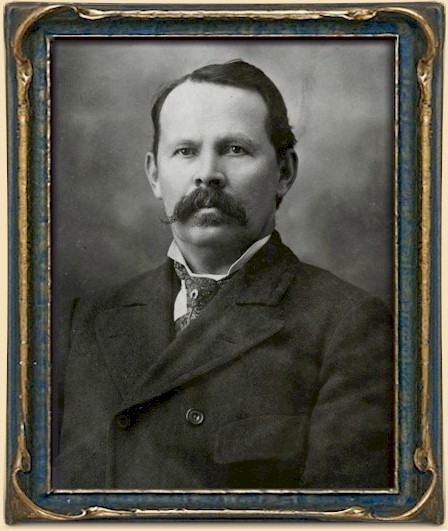 One would assume that a biography for Leopold F. Schmidt, would be the story of just another "Beer Baron."  However, on his death certificate where it stipulates as to occupation, it reveals that he was considered a "capitalist" - and a very successful one at that. This success may be due in part to the tenant he lived by, which was quoted by his daughter Philippine - "Always surround yourself with people you can learn from." 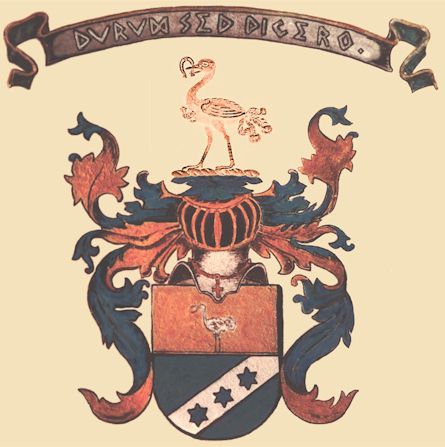 The following was provided primarily by family members and newspaper accounts of the day:

Leopold was born 23 January 1846, in Dorn Assenheim, Oberhessen, Germany. His parents moved to Weitburg, and he was reared in the ancient town of the Princes of Orange. He attended the common schools and the Latin school, and was also in attendance at the Gymnasium. At the age of 14, having a great desire to travel, he enrolled in the inaugural course of the Hamburg Seaman's School, endowed by the Hamburg-American Packet Company [HAPCO] for the scientific training of officers for their vessels. He first sailed as a cabin boy, navigating the canals and lakes of Sweden, then made numerous trips from Holland to the Mediterranean as an apprentice seaman. He crewed on German sailing ships plying the coffee trade to Brazil, and made numerous trips from Europe to the U.S. during the Civil War period. On one such trip 76 of the 176 onboard died of small-pox.

In 1866, upon landing in New York, the twenty year old Schmidt made a fortuitous decision. HAPCO was nearing completion of the world's largest sailing ship which was scheduled for a two year trading expedition to the Chinese Coast and Russia, and he was slated as its 2nd Mate.  When he left his ship in N.Y. he had the captain inform Hamburg that he would return in the fall, after a summer of sailing the Great Lakes to study American language and sailing methods. However, instead of returning to Germany and joining the ship, he decided to stay on in the U.S. This proved to be the right choice since that vessel was lost at sea with all hands, and never found.

Leopold found that America appealed to him so when the freezing temperatures closed navigation on the Lakes, he traveled to Missouri where his father was working as a mining engineer and superintendent of mines. In March of 1868 Leopold's 14 year old brother Louis arrived in the U.S. and traveled to Missouri to meet his father. However, the elder Schmidt had become ill and returned to Germany prior to the lad's arrival, and passed away that May.

While in Missouri Leopold was involved in numerous pursuits. In 1869 he assisted Dutch immigrant woodworker Henry Tibbe in perfecting a process for manufacturing corn-cob pipes by designing an auger for their production. Tibbe's fledgling workshop eventually became the Missouri Meerschaum Co. It is fitting that the word Meerschaum is taken from a German word that means "sea foam." Another pursuit of Leopold's was to apprentice as a carpenter. This started when, on a visit with relatives in St. Joseph, he secured a job working in a musical instrument factory making zithers. He learned the trade and eventually saved up enough to purchase a complete carpenter's tool kit, which was to serve him well in the future.

In the Spring of 1871, hearing of gold in Montana, he and his brother Louis booked passage from St. Louis to Fort Benton, on the flat bottom, stern-wheel steamer "Nick Wall." It was a three month trip, with the steamer pulling in to shore evenings to collect drift wood or to cut wood to fuel the boiler. Leopold later recalled the boat being frequently delayed as huge herds of buffalo forded the river. The captain avoided contact with the animals for fear of entanglement in the paddle wheel. When finally arriving in the Montana Territory they had insufficient funds to cover the overland passage and freight on their baggage. So, they walked the 150 miles from Ft. Benton to Helena, where they secured work in the gold fields and raised enough money to retrieve their baggage [including Leopold's tools]. Louis went to work as a cook and handyman, while Leopold stuck to his newly acquired trade as carpenter.  When the gold fields played out Leopold went to Butte, which was still just a tent city. There he again applied his carpentry skills and helped build the first 30 wooden structures in this fledgling town. Here he entered into a partnership with John M. Bowes, advertising their services in the local newspaper as "Contractors and Builders" and could provide "custom made coffins."

Schmidt became involved in brewing quite by accident. He had befriended a Frenchman named Peter Charles Valiton who owned the Deer Lodge Brewery. In 1874 Valiton, who was ailing and hoped to return to Europe for a stay at a Baden-Baden health spa, asked Schmidt to oversee the brewery in his absence. Upon his return Europe, Valiton decided to sell the brewery and enter the wholesale wine & liquor business. The experience of running a brewery appealed to Leopold and in 1875 he formed a partnership with Raymond Saile, Valiton's brewer. They then built the Centennial Brewery at Butte. The brewery was named Centennial for its date of establishment, the nation's 100th anniversary. Upon completion of the brewery's construction his professional activity as a builder ceased, and his partnership with Bowes was dissolved as of 26 September 1876.

For the brewery's trade mark they chose the horseshoe, which one would assume was merely a good luck sign, but the horseshoe was an integral component of the Schmidt coat of arms (see top of page).  He frequently displayed this family symbol on his person, in the form of a diamond studded stickpin. Leopold would again adopt this motif in what would become one of the most recognizable trade marks in brewing - the Tumwater Falls cascading from a horseshoe.

Leopold had  formed a partnership with Daniel Gamer in the operation of a saloon, and in 1877 Gamer bought into the brewery and Saile bought into the saloon. The resulting three way partnership was called Schmidt, Gamer & Company. Saile seems to then assume the role of silent partner, and on the 1880 census he gives his occupation as a miner.

With the brewery fully operational Leopold felt that he needed to fully grasp the chemistry of brewing. So, in September 1878, he returned to Germany to attend the world's only brewing academy, which was located in Worms. While at the academy he met the woman he would marry, Jacobina Johanna Susana Steiner. On 19 April 1879, Leopold & Johanna were married, and set out the same day to return to Montana. Leopold arrived back in Butte City on May 26, with a Master Brewer's certificate and a bride.  A year later, Peter Gustav Schmidt, the first in a family of five sons and a daughter, was born.

While busy operating the brewery, Schmidt also found time to delve into state politics. Having become a prominent member of the community, he was elected county commissioner of Silver Bow County; was elected to the Montana Constitutional Convention; and served in the first two terms of the Montana House of Representatives. Because of his background in the building trades, he later served as a member of Montana's Capitol Building Commission.  In 1895, Schmidt traveled to examine the design of the state Legislative Building under construction in Olympia, as well as the state capitol buildings at Olympia, Salem, Sacramento, and Carson City. Also in his capacity on the Capitol Commission, he was to study the Washington State Constitution, (the two states having gained statehood at virtually the same time). He then assisted in the writing of Montana's constitution.

In July of 1895 Leopold, traveling with his brother Louis, took the time out of his fact finding mission to assess a possible site for a new brewery. Leopold had been impressed by a river site at the nearby town of Tumwater, as well as the artesian spring water there.  Subsequently, on 17 September 1895, they purchased the old Biles and Carter Tannery on the banks of the lower Deschutes River, and obtained the rights to the lower Tumwater Falls as a power source for the brewery. The Schmidt brothers returned to Butte, and immediately packed up there families for the return trip to Tumwater.

In October 1896, after issuing $125,000 in capital stock, he established the Capital Brewing Company, nucleus of what would become the highly successful Olympia Brewing Company. The brewery was an unqualified success, its product outselling competing beers from Seattle and Tacoma. The pure artesian water and Schmidt's brewing skills were a perfect match. The enterprise steadily grew in production in the following years, reaching peak production of 100,000 barrels of beer in 1914, just in time for statewide prohibition. This not only shut down the Olympia plant but also the other two plants in the state, the Bellingham Bay Brewery and the Port Townsend Brewery. Oregon also voted to go "dry" in 1914, five years before national prohibition, which ended the Salem Brewery Association.  Only the two Acme Brewery plants in San Francisco were spared, albeit temporarily.

That year also marked the end of Leopold Schmidt's life. He died at his Leopold Hotel in Bellingham, on 24 September 1914. In memoriam, Henry H. Schupp, Leopold's long time business associate, said the following:

"The death of Mr. Schmidt's wife, Johanna, occurred five years ago and according to intimate friends and relatives the shock of her death was so great that Mr. Schmidt's health began to fail from that time on, and he began to relinquish the reins of his business interests to his sons.  He had recently taken a two year tour, almost around the world, seeking specialists, sanitariums and reputed "cures" for his ailments.  We will remember him as a "builder" in every sense of the word, with a fine reputation for philanthropic acts properly bestowed with modesty, reticence and averseness to publicity there from."

Unfortunately, Leopold did not live to attend the wedding his only daughter, Philippine. On 29 Nov. 1917, she and

A special thanks to Paul Secord who provided an oral history of the Schmidt family - recollections spoken by Philippine Schmidt, Leopold's daughter.