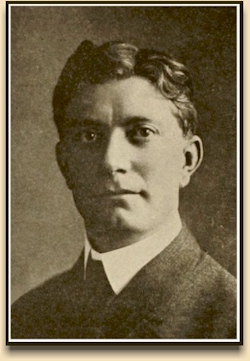 The following is from: "A Volume of Memoirs and Genealogy of Representative Citizens of the City of Seattle and County of King, Washington"
Lewis Publishing Co.; New York & Chicago; 1903

"A Biographical record of the representative men of Seattle and King county would be incomplete and unsatisfactory without a personal and somewhat detailed mention of those whose lives are interwoven so closely with the industrial activities of this section.  In the subject of this review, who is secretary and treasurer of the Hemrich Brothers Brewing Company , we find a young man of that progressive, alert and discriminating type through which has been brought about the magnificent commercial and material development of the Pacific northwest, and it is with satisfaction that we here note the more salient points in his honorable and useful career.

Louis Hemrich was born in the town of Alma, Buffalo county, Wisconsin, on the 20th of May, 1872, a son of John and Catherine (Koeppel) Hemrich, the former of whom was born in Baden, Germany, and the latter in Bavaria.  They came to America and resided in Wisconsin for a number of years, removing thence to Seattle when the subject of this sketch was a lad of about fourteen years, his rudimentary educational training having been secured in the public schools of his native state, while he continued his studies thereafter in the public schools of Seattle, where he prepared himself for college.  At the age of eighteen years he matriculated in the University of Washington, where he completed a commercial course.  After leaving school Mr. Hemrich took a position as bookkeeper for the Seattle Brewing & Malting Company, where he remained for a period of three years and was then elected secretary and treasurer of the company, in which capacity he rendered most effective service for the ensuing two years.  He then resigned this office and forthwith became associated with his brothers in the organization of the Hemrich Brothers Brewing Co., which was duly incorporated under the laws of the state.  They erected a fine plant, where is produced a lager of the most excellent order, the purity, fine flavor and general attractiveness of the product giving it a high reputation, while the business is conducted upon the highest principles of honor and fidelity, so that its rapid expansion in scope and importance came as a natural sequel.

As a business man Mr. Hemrich has shown marked acumen and mature judgment, and his progressive ideas and his confidence in the future of his home city have been signalized by the investments which he has made in local realty and by the enterprise he has shown in the improving of his various properties.  In 1901 he erected in the village of Ballard, a suburb of Seattle, a fine brick business block, located at the corner of First Avenue and Charles Street, and he has also erected a number of substantial business buildings in the city of Seattle, together with a number of dwellings.  He is the owner of valuable timber lands in the state and has well selected realty in other towns and cities aside from those already mentioned.  He has recently accumulated a tract of land on Beacon Hill, and this will be platted for residence purposed and is destined to become one of the most desirable sections of the city.  Mr. Hemrich erected his own beautiful residence, one of the finest in the city, in 1901, the same being located on the southwest corner of Belmont Avenue and Republican Street.  It is substantial and commodious, of effective architectural design, having the most modern equipments and accessories and is a home which would do credit to any metropolitan community.

While Mr. Hemrich takes an abiding interest in all that concerns the advancement and material upbuilding of his home city and state, he has never taken an active part in political affairs, maintaining an independent attitude in this regard and giving his support to men and measures.  Fraternally he is a popular member of the Ancient Order of United Workmen and the Fraternal Order of Eagles, and he is most highly esteemed in both business and social circles.  On the 20th of May, 1897, in the city of Seattle, Mr. Hemrich was united in marriage to Miss Eliza Hanna, daughter of Nicholas and Mary Hanna, who were numbered among the early settlers of this city, where Mrs. Hemrich was born and reared and where she has been prominent in the best social life." 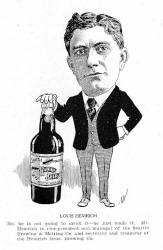 This image first appeared in the Argus Monthly magazine and was later included in "Men Behind the Seattle Spirit - The Argus Cartoons," published 15 July 1906 by H. A. Chadwick.

On May 2nd, 1910, Louis's brother, Andrew, president of Seattle Brewing & Malting,- succumbed to a prolonged bought of blood poisioning. Louis was then elected by the company's board of directors to assume his brother's position as president of the brewery and to continue overseeing its phenomenal growth. By 1914 the brewery was the largest west of the Mississippi and 6th largest in the world. Additionally, it was the largest industrial enterprise in the state of Washington. But this twas about to change.

Unfortunately, statewide prohibition was approved by Washingtonians in late 1914. Breweries were given until the end of 1915 to liquidate their stock and terminate the production of alcoholic beverages. Some plants continued operating through production of near-beer and/or soft drinks. But Louis charted a new course for Seattle Brewing & Malting and its famous brand.

Rainier Beer had been marketed in California since the mid-1890s, and had a strong customer base there. So, convinced that the whole nation would not make the same mistake as Washington state, the Hemrichs chose to build a new brewery in San Francisco.

The plan was was announced in March of 1915, and by October the plant was in operation. The Rainier Brewing Co. was new in name only. Louis Hemrich was still president. The other officers, and many of the workers, were from the Seattle plant.

Success continued in California, but again Prohibition dealt a crippling blow to the enterprise. Beginning in 1918, war-time restrictions forced the brewery to adopt the production of malt beverages and soft drinks in order to keep the plant running. Then a personal blow struck the company's president when Louis' wife, Lizzie, died on Oct. 30, 1918, during the height of the influenza epidemic.

An added blow to all brewers was that before war-time restriction could be lifted, nation-wide Prohibition was voted in, and on Jan. 16, 1920, brewing was limited to beverages containing less than ½ of 1% alcohol.

Now Louis looked to Canada for a way to keep the House of Hemrich solvent. In December of 1920, he purchased the old Imperial Brewery in Kamloops, B.C. It went on-line the following year, and in 1922 the Rainier Brewing Company Ltd. was formed. Unfortunately, the venture did not live up to expectations and went bankrupt in 1923. Hemrich sold to a group of local investors who would later organize as Coast Breweries, Ltd. Coast Breweries retained rights to the Rainier brand in Canada, in spite of efforts by Hemrich to prevent this.

In 1926, Louis, along with Joseph Goldie, formed an investment group who purchased the Georgetown plant in Seattle and the San Francisco plant from the estate of his brother Andrew Hemrich. When Prohibition finally ended in 1933, and the plant re-opened, Louis Hemrich was CEO, and Jos. Goldie, president. They soon entered into negotiations with Emil Sick, who had leased the old Bay View plant, for the rights to market Rainier Beer in Washington and Alaska, and on July 4th, 1935 the merger of the Rainier Brewing Co. of San Francisco with the Century Brewing Association of Seattle was made public. The new corporation was named the Seattle Brewing & Malting Co., and had Louis Hemrich as chairman of the board of directors, with Emil Sick, president.

In July 1938, Louis Hemrich retired from active involvement, but remained on the Rainier Brewing Co. board of directors. A little over three years later, on 26 September 1941, Louis succumbed after battling a three month illness. He was survived by his spouse, Etta Maude, and two daughters.